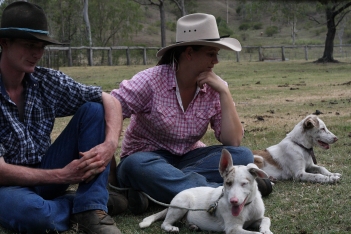 The Gin Gin district was originally settled in 1847 when Gregory Blaxland and William Forster moved into the area with sheep and cattle. The site where the town now stands was once part of the sprawling Gin Gin Station owned by Sir Thomas McIlwraith, who was Premier of Queensland three times between 1879 and 1893.

The Gin Gin district is nicknamed Wild Scotsman Country due to the capture of one of Queensland’s few bushrangers, James Alpin McPherson, in the area on 30 March 1866. McPherson, who went by the same nickname, was captured at Monduran Station, 13 km north of town. The Wild Scotsman Festival is held in Gin Gin on the third week of March each year to commemorate this event.

We were fortunate to be welcomed by some modern Wild Scotsmen and women, Doug and Sue Campbell, our hosts for the weekend. Doug’s father, Bill, was on hand to keep us younger folks entertained and informed with stories about dogs, cattle, yard building and the Queensland Governments plan to stop grazing on leasehold country by 2024. That dog, Bruce, performed above and beyond the call of duty and hopefully some of his progeny live up to the standard he set.

Our first project was to muster some of Doug’s quiet cattle out of the big “cooler”, up through the “let-out” yard and into the gate that “can’t be got through”.  Generally this went well and the common area where participants had difficulty came from dogs forcing unnecessarily from behind their livestock. Sean’s run was voted by the group to be the worst of the day and I did remind him of the old adage: “Those who can’t do, teach.” But to be fair, Sean’s dogs needed to educate the livestock to yield to correct pressure, which looked a bit untidy at first, and, he slipped a young pup out to demonstrate the W.A.I.T training program and, he was one of the few who succeeded in yarding his cattle. However, I am with you guys on the judgement.

Moving onto the principles of stock handling saw the group meet the challenge of guiding 5 head of cattle through a figure eight course taking turns at being the leader and a dog. This stimulated an awareness of the requirements needed to control livestock correctly. Balance (noun. 1. a state of equilibrium or equipoise) is necessary to keep the livestock away from the fence and on course.

Starting pups on a few of Grayleen’s goats proved to be popular as we had a lot of them, ranging from 3 weeks old to 9 years old. The concept of allowing your young working companion to develop its innate natural ability to hold livestock together whilst gently correcting any desire to bite or split the group into multiple mobs was well received.

The eyes are a came

ra The 10 Commandments was probably the most relevant session of the school and most participants reckon they could improve their current dogs, and definitely give their next pup a better chance at success, by applying this simple technique.

Chief was kept very busy keeping the trainer mob off the fence and on the figure eight course as most of the dogs were giving this new “balance” concept a go. However, other than the odd spill caused by wrongly timed and misplaced force most dogs improved markedly from this exercise and seemed to enjoy their new found sense of responsibility.

Moving on to real world stock-handling Sean demonstrated how, with a little cattle education, he could ask a mob of 15 head to go from a large yard back through the narrow pound gate. Generally the group considered this feat to be impossible however, a little knowledge goes a long way and by the end of the exercise all students had succeeded with their own mob. What’s more the cattle became calmer and more accepting the more they were worked as they learnt to handle pressure with less fear. Teaching cattle to handle pressure well is critical for developing a stress free management program that works from farm to plate.

Again our thanks go to Doug and Sue Campbell for hosting a challenging, yet revealing three days and to Grayleen and Jack Taylor for having the vision and putting it all together.