A while ago my northern neighbour changed lessee’s. Usually that would be a simple enough operation: Old lessee (Bob) musters his cattle into the yards, trucks them out, new lessee (Johnno) trucks his cattle in.

The property is about 2500 acres of steep, heavily timbered country hiding about 70 head of cattle. The usual practice of cattle management  relied

on the age old use of “Black gold”

Strategically placed troughs of Molasses entice the cattle into portable yards where calves are branded and the whole mob is released until next year. It turns out that a few of my cows were running on the block and communication of this fact from Bob was non existent. Allegedly, a few extra cows bolsters the calving percentage considerably.

After half a dozen years the “Black Gold” had lost its sheen so Bob employs one of the local guru contract musters (Lancelot) with his fast horses and about 10 hard, heel biting Collies. From the stories told in the truck, on the way to the muster, Bob was feeling extremely confident. In the yards by lunch, a couple of loads trucked out by Dinner, Bobs your uncle.

Bobs report of that fateful day wasn’t as pretty as he had imagined. Cattle ran rings around the 3 men and 10 dogs for 8 hours. “Those bloody Collies followed my old black dog around all day and he is f%@#ing useless on a good day.” This wasn’t a good day. By nightfall 9 head were yarded, none were trucked and differences of opinion were being expressed over payment for services rendered. 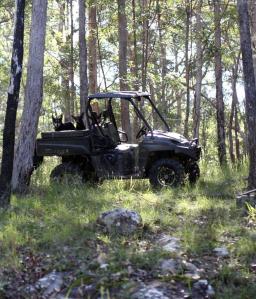 Johnno rang me, said he was paying for agistment for cattle owned by Bob, another neighbour and about 10 of mine. ‘Do you reckon your dogs could muster the remaining 60 head into the portable yards?” He gave me a bit of their previous history, including a bit about Sir Lancelot and  the hard biting dogs debacle.

As most of these cattle had lived their lives as wild animals they hadn’t had much education. A lot of their experience with humans and dogs involved them seeking relief through escape. A large percentage of the property is overgrown with weeds ranging from Casuarina regrowth to Lantana, both offering these kind of cattle good cover. Casuarina’s offer food and habitat for the beautiful, if noisy Black cockatoo.

With 5 experienced dogs, Chief, Suki, Storm, Force and Clancy and 1 19 month old bitch, Swift in the Ranger I picked up Johnno at the portable yards and set out for a look about.

The cattle were living in small mobs between 5 and 20. Some we could only find tracks leading into the undergrowth but each time we asked the dogs to “look” they would find, make it uncomfortable for the cattle where they were hiding and give them relief following the Ranger.

This education process averaged about 10 to 15 minutes for each mob and then we would set off for the yards, hold them at the gate until they decided the best relief offered was into those yards. Every beast we encountered we yarded except for a cow, with a week old calf, we elected to leave behind. END_OF_DOCUMENT_TOKEN_TO_BE_REPLACED