As I was educating weaners at “Riverside Station” Charles kindly invited me to witness a typical helicopter muster. The terrain varied from hostile rock strewn mountains through dense eucalyptus forest to some more open pulled brigalow scrub. Visibility changed from around 30 metres to 300 metres and water was available in one natural stream, a bore and a couple of fenced water squares.

The cattle were first calf, predominantly brahman heifers, brahman bulls and some wayward “Legend” cattle. There is a station in the district, which shall remain nameless, whose cattle invariably find their way out onto the “long paddock”, living on roadside grass. As surface water is scarce these cattle find their way into the neighbouring stations and have developed a reputation for being difficult to muster. So much so that anyone who succeeds at this venerated task earns the Legend status.

Charles and the Legend team 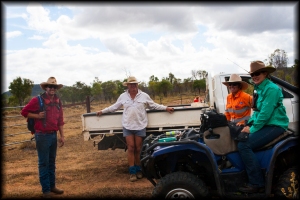 The Robinson R22 has a fantastic reputation for finding cattle in tough country ‘though its ability to muster depends on the stock handling skills of the pilot and the ground crew. It is also a machine and requires maintenance. Charles got the call early in the morning that the 10:00am plan was now extended to 12:00 pm. A management decision was made to press on through the first paddock of a couple of thousand acres as the water had been, strategically, shut off about a week before. We picked up 6 cows with their calves at the gate to the water square and set them on a course for the second paddock. Charles, the KingQuad, and his dog team, lead by Wump and Choko ,looking like Brad Pitt coming back from a stint in New Guinea, ran along the Southern fence looking for cattle and tracks while Claire and I checked the Western and Northern fence-lines. If we wanted to view into anywhere but the boundaries of this paddock we would have to wait for the Robo, but, we were confident that shutting off the water had moved the herd in the desired direction.

As this Burton Station is a relatively new acquisition for the Williams family Charles thought it prudent to invite the manager, Jim and his wife Netta to advise us on the lay of the land.

“That eastern boundary of this second paddock runs around to an impassible bluff. Rumour has it that there is a sidecut but I haven’t located it yet.” Jim explained, “The centre road goes down through some more open country to the bore and natural creek water. That’s where those “Legend” cattle were last seen but you’ll need more than those fat dogs to get them. A chopper and a .308 Winchester might be what you need.” Jim told us. “They’re not fat, just loved” Netta calmed the conversation as Charles worked out that I would take on the Bluff in Claire’s Viking while they mustered the bore and Jim and Netta left us to it. The R22 had now run out of daylight and would be here by early the next morning.

The Eastern fence-line of this paddock of about 1200 acres is an interesting easy run on a well graded track bounded by thick tree and shrub ground cover. The bluff was indeed impassible to the Viking but the sidecut was where you would expect so after following some reasonably fresh cattle tracks I moved quickly to our pre-determined meeting place. 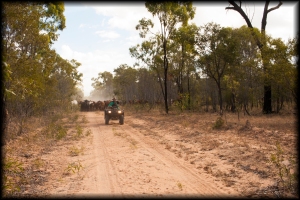 Charles cast his dogs around eighty head of cows, their calves, some bulls and half a dozen “Legends”. The few cows that felt they needed to protect their sappy big calves were quickly reminded by Choko and his mates that the way to attain relief was to follow Claire on the Grizzly. A couple of the “Legends” used a half-hearted break by a bull getting away from his compatriots to mount their own challenge to authority. They picked up the concept of gaining relief in the mob when Wump and Amy pressured them to return and then checked their progress by guiding the cows through the trees and onto the road. When my team joined the group my dogs held the mob while I offered water to Charles’s dogs and then we moved uneventfully to the next water square and the beginning of the third and final paddock. The old bull which had been getting a hiding from his mates tried a couple more tangents but met his match when Clancy kept him out of the overflow by tracking along at his eye level in the mob.

Charles was checking his watch when I asked him for the size of this last and final paddock. “800 acres of more open country and it’s 2:30pm whatdoyareckon?” ”

Charles and Claire sent me up into the rough stuff again while they started the main mob along the flat. The Viking has the turning circle of the Queen Mary and is nearly as long but it was able to pick a way through the iron bark maze, cross a couple of steep gullies and find a power-line track to the front of the paddock. About 50 or 60 pairs were grazing about the water square so the dogs softly dominated them to a point where they found relief by walking through the long wire gate. Upon shutting that we followed the gulley back towards the others.

Claire and Charles had the main mob drifting along at a slow pace with a few heifers still challenging the authority of the dogs. Charles said he asked his dogs to back off to avoid confrontation so I suggested we allow the dogs to judge this for themselves as they are all bred to be fair and offer relief when it is necessary. After a few minutes of readjustment the mob stepped up to a good rate, the cows stopped challenging and a happy truce ensured. There are many times when we just have to acknowledge that our furry panels know more about stock handling than we do. 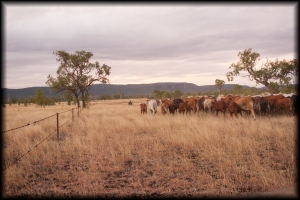 From the water square Claire got out on the highway to protect cattle and dogs from any rapidly moving mining traffic while my crew feathered the mob towards the gate so Charles could get the count. “12 cows short” beamed Charles. I think he was already considering the accolades he was now entitled too for getting most of those “Legend” cattle. We moved the herd about 500 metres along the roadway, over a bridge and then sent some dogs up to roll them through a gateway into a lane on the other side of the road. To watch natural stock dogs roll livestock through gateways is one of the joys of the job and for some of these dogs it is a real craft. While Claire and I rebuilt a damaged wire gate Charles was busy cancelling the chopper for the next morning.

The Viking with dogs and water.

I volunteered to look for the missing 12 cows and 12 calves first thing in the morning while Charles, Claire, Jim and Netta started drafting and branding the main mob. Jim and Netta turned up with some very nice looking horses to help yard up and they gave me an inquiring nod as I drove passed in the Viking.

Four cows with their calves were just above the bore and one black heifer would rush out 20 metres to challenge the dogs so I planned a move towards the natural creek water in case the re-education process required some fresh dogs. One more cow and calf were at the creek and after fifteen minutes we had an agreement where the cows walked and the dogs guided. The water square yielded up a further five cows with calves so we started a steady drive across the open country. At the end of the big flat I could see two more cows with calves but the red cow with a hooked horn was already on the move heading for the high ground and thick timber. A hurried call to Chief and Suki cast them out of sight and after a couple of brief barks and a bit of dust rising the two groups of cattle and dogs became one. The red cow carried the “Legend” brand and she was your classic rogue cow. When ever she thought she had enough cover she’d break and I was excited to see young Zoe (12 months old) adopt the drift section of her eye and prevent her from breaking through the couple of kilometers of brigalow scrub country.

Two more pairs had drifted to the final water square and so the dogs calmly moved the 14 cows with their calves out onto the highway and into the lane-way leading to the yards.

Legends of the Bowen Basin

Earlier that morning Claire explained how the three steers out on the road were typically some of the “Legend” stock in the long paddock and if possible muster them in but the chances of success were low. That sounded like a challenge. The standard of the fence on the northern side of the road could best be described as ordinary so the dogs stayed in the Viking as we just bumped the bubble of their flight zone so as not to burst it. They went passed the gate on the first attempt and then galloped through it on the second. I allowed them a bit of time to settle with the cows out of sight, over a rise, and then approached, carefully, until the steers started to run. The dogs pulled them up and explained the benefit of seeking relief in the mob which they continued to challenge, along with their compatriot, the red cow, until we came to the yards whereby they calmly walked in. All fourteen cows, their calves and the three “Legend” steers.  Proving that strong but compassionate dogs which quickly offer relief to uneducated or spoilt cattle gain their trust and achieve success.

Jim said as he recognised the red cow and the steers, “Looks like you did alright” Looks like it Jim, fat dogs, no chopper, no .308 Winchester just some clever dogs and a bit of knowledge.