It is little wonder that Thunderbolt was attracted to this paradoxical border region.

Throughout his career as an outlaw he never fired his pistol in anger. In fact his demeanor towards his victims was always polite and jovial. In 1867 Thunderbolt, and a young accomplice, held up and robbed the Bonshaw store/hotel in a very non-violent and respectful way.  J.N. Roper’s Account

His “death” was just as intriguing  as it was enshrouded in a Police coverup, a suspiciously tall woman with a manly gait attending the funeral and a boat trip to USA by a Fred Ward and Sarah Shepherd. The real names of Thunderbolt and his mother. 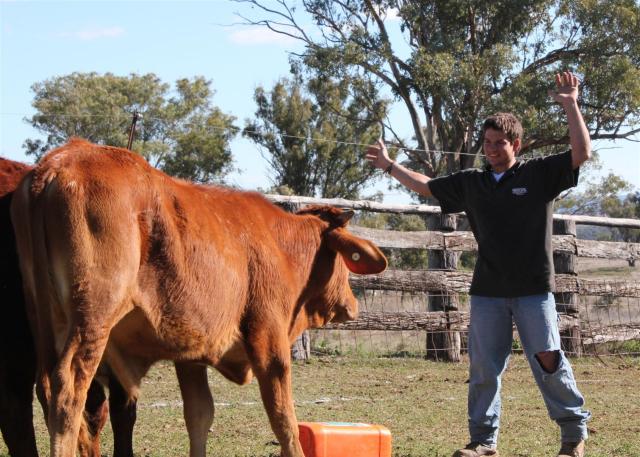 The Bonshaw region is dominated by the Dumaresq River which immediately exerts its influence by showing us vigorous irrigated crops along with devastated irrigation infrastructure from recent floods.

The Dumaresq River starts 57 kilometers west of Tenterfield, where Pike Creek below Glenlyon Dam, the Severn River, Tenterfield Creek, and The Mole River join together.

The river flows westwards, and from being the borderline between Queensland and New South Wales,  for a while, flows into the MacIntyre River, and eventually, after half a dozen name changes, flows into the South Pacific Ocean as the River Murray, in South Australia.

Even Google is confused by the region and has Bonshaw on the Queensland side of the river, or, perhaps this is a guise for any would be modern bush-rangers.

This “introduction to stress free stockhandling” school was very aptly organised by Grant and Tracey Hutchings  and all facilities, livestock and accommodation were kindly provided by Dean and Kath Roberts at “Miamba”

Participants mustered about a dozen head of yearling cattle from a yard to a smaller yard using their dogs. From this exercise it was apparent that many dogs lacked balance and handlers tended to use them as extensions of themselves.

After some intriguing theory lectures from Sean the rest of the day was spent starting pups on flocks of Dean and Kath’s calm Dorper cross ewes where the need for balance became more evident.

After dark  stories from the Bonshaw Bench mingled with Tracey and Ashleigh’s barbeque smoke and the warm smoothness of neat Dimple to the point where those  “Border” Collies were achieving unbelievable tasks. You just had to be there.

The Eyes are a Camera

Deans new Kelpie barks all night, how do you stop it? The eyes are a camera.

Brendon’s young Collie crosses between him and the cattle, what can he do?  The eyes are a camera.

Owen’s Collie is floating about not engaging the livestock, how do we correct that? The eyes are a camera.

Grants clever young Kelpie is being an idiot and its eyes are a camera what to do? “More real work, less training Grant”. “Thanks guys.”

Moving a trainer mob around a figure of eight course with no dogs, only handlers learning position was an epiphany for most of us. Scott copped a bit of flak for focusing on his dogs, instead of the livestock, during the cattle education program but that is the privilege only enjoyed by graduates from our previous schools. Thanks Scott.

Craig’s succulent, spit roasted lamb, local Merlot and the warm smoothness of that neat Dimple proved too much for Sean who claimed “the romance of cooking with a wood fired spit was what led me, indirectly, to my ATCO donga so early.” Was that Matt raising his eyebrows?

A figure eight, cattle, dogs and all of that new stockhandling knowledge, how hard can it be? Well compared to the “Paradigm Station” challenge that followed it wasn’t too bad. Matt learned that the “Miamba” House paddock is larger than it first appeared and Dean was happy with eighty percent of his cattle making the course. Charlie enjoyed a walk with his “Dingo’s” down to the shearing shed as everyone knows they prefer mutton. The day was completed on dark with some sheep mustering under  rustic, gnarled, eucalyptus beauty, another symbol of enigmatic Bonshaw. 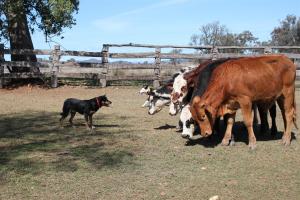 Grant has kindly taken a heap of photos and here are his proofs. If you would like some copies email or ring Grant. 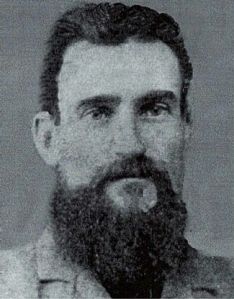